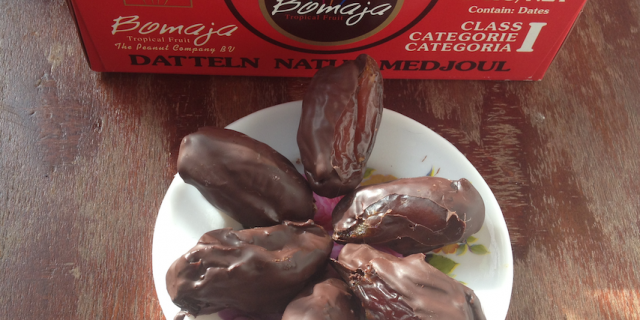 This is the story of Chocolate Almond Cinnamon Dates. What do you do when you have 1 kg of fresh Medjoul dates at home and someone drops by and gives you three bars of 85% dark organic chocolate that you don’t usually eat? I thought about giving them away as a present but instead I got inspired to get creative in my kitchen. Last year we visited friends and they served us large fresh chocolate covered dates with our tea. They were so delicious that I couldn’t get enough of them. After our visit I even tried to find them in local Turkish shops but they were all sold out. Apparently they sell them only around Ramadan. Today I have tried to recreate these delicious sweet treats by pitting my fresh dates and giving them a warm chocolate bath. But just dipping my dates in chocolate wasn’t enough. I searched my kitchen cabinets for exciting stuff I could add and started experimenting. One of my favorite treats is chocolate cinnamon covered almonds but I think I have topped it.  The result of my experiment: delicious dark chocolate covered fresh Medjoul dates with a filling of blanched almond cream with cinnamon, a pinch of sea salt and 1 crunchy blanched almond at its center. OMG! These Chocolate Almond Cinnamon Dates are divine. YOU HAVE GOT TO TRY THESE!

WARNING: This recipe will spike your blood sugar levels.

If you want to make it 100% raw and refined sugar-free, you can make your own chocolate using the recipe for raw chocolate here.